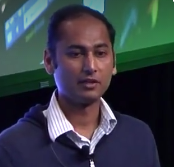 Anant Rao kept the mobile conversation going, focusing on the new visualization techniques LinkedIn has been using to find opportunities in its mobile apps. Real User Monitoring, or RUM, has been used at LinkedIn for tracking the performance of real user experiences in production. However, the team found that they were hitting up against the limits of what the data could tell them, so they sought to make RUMv2 much more detailed. The first step for the team was to deeply integrate instrumentation points into their core frameworks, such as the networking and parsing libraries. This obviated the need for product engineers to instrument their own product flows and made high-quality metrics available for interaction. The second key component was visualizing the data. Now that all interactions had production data, engineers could quickly find and fix systemic issues. Anant described examples of three such wins, before finishing with a peek at their Anomaly Detection system.